Tribute to Our Founder 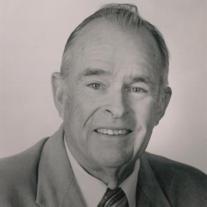 John Bridge attended Mirror Lake Junior and St. Pete High and was a graduate of the Florida Military Academy, Class of 1943, where he lettered in football and track. He then joined the Navy as part of the V-12 program. He spent his first year in the Navy at Duke University. He passed his radio technician’s test, and took a year to complete his studies. He was later shipped overseas and saw duty in Guam and the Philippine Islands in the Second World War. After his discharge in 1946, he attended St. Petersburg Junior College for one year and then returned to Duke University for two more years where he lettered in track.

He returned to St. Petersburg in 1951 and married a lovely young lady named Ann Smith. They had four wonderful children, John, Lorin, Debbie, and Nancy. Together as a family they were very close. He and his wife enjoyed 61 years of happy marriage.

In 1949, he accepted a position with Aluminum Company of America (ALCOA) and later worked for Allstate Venetian Blind & Florida Jalacies. In 1950, Mr. Bridge opened Acme Air Conditioning in St. Petersburg. In the mid-fifties, his shop foreman put together a unit that would both heat and cool and is now known as a heat pump. Mr. Bridge drove the unit himself to the Mathes Air Conditioning Company in Fort Worth, Texas. Three months later, he had 200 factory-built heat pumps in his warehouse. Early users of the heat pump at Treasure Island, Florida, were The Thunderbird, Buccaneer, and Sea Chest Motels, and The Redington Reef Condos.
Mr. Bridge attended to his business on a daily basis, and was often heard saying “I never went to work a day in my life”.

A stroke sidelined him in 2001, and he had to slow down. Both sons, John and Lorin, have been in the air conditioning business with their father for over 35 years, and they have continued to operate their father’s business on the same principles which he established.

Mr. Bridge enjoyed being active in many social and civic organizations over the years. He served as President of several local organizations including the Inter-Civic Bowling League, and later President of Junior Achievement in Pinellas County. He joined the Civitan Club of St. Petersburg in 1953 and became president in 1960. He was voted outstanding Civitan in 1966 and later became the Lieutenant Governor of the Civitan Florida District in 1974. He received the Florida District’s Honor Key that same year.

He served as President of the Polywogs in 1978, which is a group of men dedicated to producing the then oldest and continuous golf tournament for the ladies of the LPGA. In 1979 he was elected as President of the Suncoasters, a group of men and women that have, for many years, produced the Festival of States and many related activities in early April of each year. He also served on many boards, including the YMCA, Squires, St. Petersburg Quarterback Club, St. Petersburg Yacht Club and served for ten years on the board of Abilities, Inc.
Mr. Bridge was an avid golfer and a member of the Sunset Country Club, Vinoy Country Club and Feather Sound Country Club. He also enjoyed boating and his mountain home in Highlands, North Carolina.

He is survived by his beloved wife, Ann Smith Bridge; his sons and daughters-in-law, John & Mimi Bridge and Lorin & Patty Bridge, both of St. Petersburg; his daughters and sons-in-law, Debbie & Fred Moore and Nancy and Don King both of Bradenton; seven grandchildren, Jay and his wife Cara, Ryan and his wife Julie, Kyle and his wife Angie, Trevor, Lorin and his wife Heather, Lisa and her husband Eric, and Brett; great-grandchildren Austin, Byron, Emrie, Hunter, Hana, and Hayden.

A Farewell Celebration will be held at Anderson-McQueen Family Tribute Centers-NE St. Petersburg Chapel, 2201-Dr. M.L. King Street North, St. Petersburg on Saturday November 10, 2012 at 11:00 am with a Gathering from 10:00 am until the service time. More Details

Acme Air Conditioning has been servicing Bay Area air conditioners for over 70 years. Whether you need sales or service, we have the staff and experience to keep you cool.